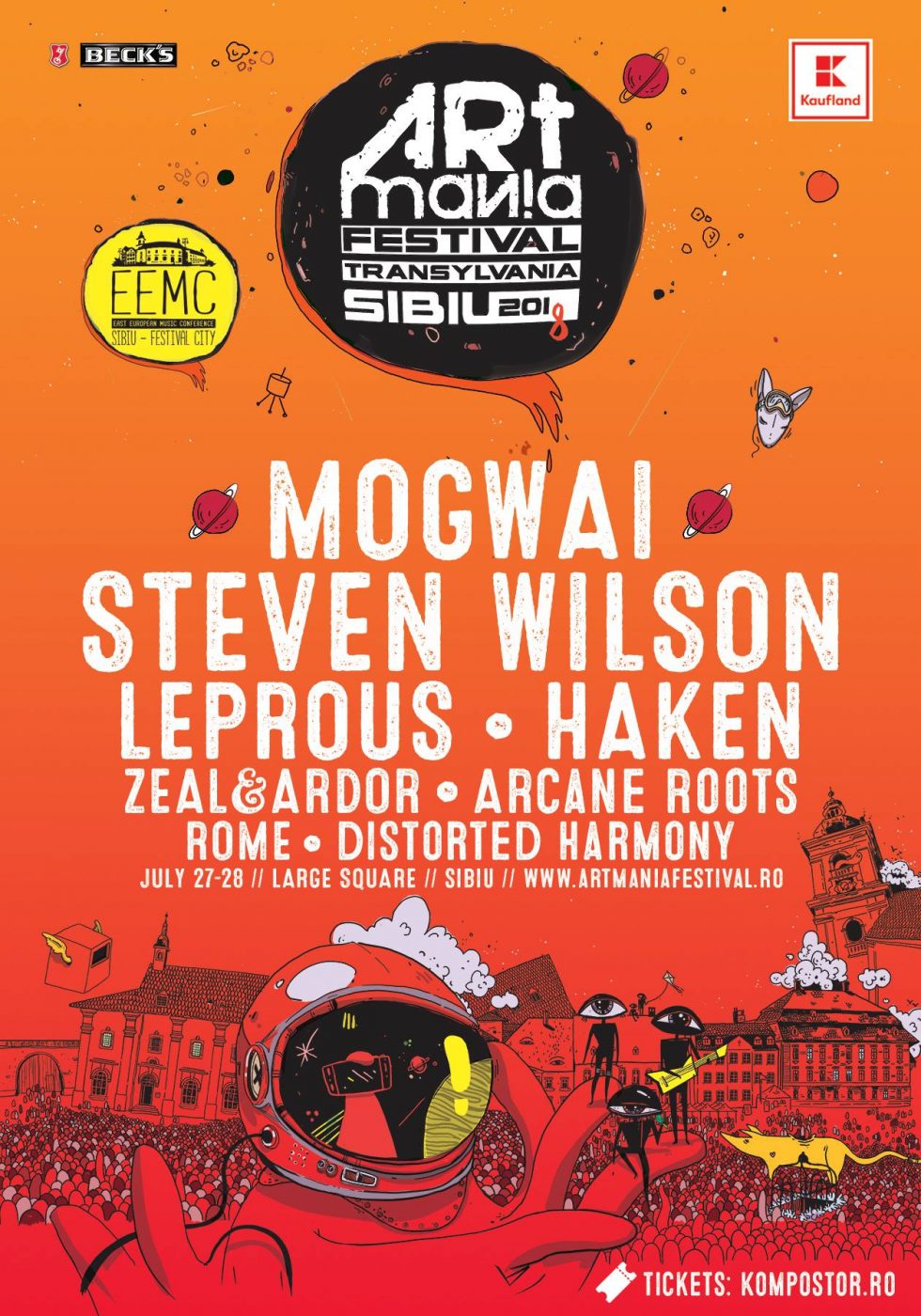 Steven Wilson, Leprous, ROME, Zeal & Ardor and Distorted Harmony are the first artists confirmed at the 13th edition of the ARTmania Festival, which will be held from 27 to 28 July 2018, in the Grand Square of the medieval fortress of Sibiu . And in 2018, the festival aims to offer a varied line-up during the two days of concerts to bring some of the best-known artists of the moment to the fans.

Steven Wilson, first brought to Romania by ARTmania Festival , is a name that no longer needs presentations. Founder of the well-known Porcupine Tree band and other successful projects, the English artist is one of the most prominent and prolific names of the international music scene – a true icon that, for almost half a century, leaves his impressions on various genres, such as progressive, psychedelic and not only.

He writes, records and produces music from the age of 10, the first contact with this art being only 8 years old when he began to listen to Pink Floyd (“Dark Side of the Moon”) with his father and the album “Love to Love You Baby “by Donna Summer artist. At this age he began to experiment and develop musical production techniques. Their first compositions appeared in the mid-1980s, a decade after Wilson released two projects that secured her entry into the professional music world: “Porcupine Tree,” exploring psychedelic, progressive rhythms and bold approaches to music 70s, and “No Man”, the result of his long-term collaboration with artist Tim Bowness.

Things began to evolve quickly with Porcupine Tree, the second album, “Up the Downstair” (1993), was rated “Melody Maker” as a “psychedelic masterpiece […], one of the albums of the year.” The following works attracted the attention of the press and the appreciation of critics and fans, the band being considered by many voices as “Pink Floyd of the Nineties”. “In Absentia,” released in 2002 under a known label (Lava Records, USA), has entered the European charts and is still one of the top 3 best-selling Porcupine Tree albums. He also won the Best Made-For-Surround Title at the Surround Music Awards (2004). The next album, “Deadwing” (2005), won the title of “Album of the Year” at the “Classic Rock Shops” Awards and Best Made-For-Surround Title. “The Incident” (2009) his 10th studio album, was nominated for the Grammy Awards and was followed by a sold out show tour on some of the most famous scenes such as Radio City Music Hall (New York) and Royal Albert Hall (London). All this made the 2010 Porcupine Tree band, founded by Steven Wilson, be recognized as the world’s most prestigious underground band.

Since 2003, Steven Wilson has begun composing and producing music under his own name, with new works including innovative musical approaches and treatments including well-known pieces by artists like Alanis Morissette, Abba, The Cure, Momus, Prince or Donovan . From a stylistic point of view, this allowed Wilson to expand his musical palette with new genres such as electronic music or “noise music”.

The first solo album, “Insurgentes” (2008), included 10 tracks combining a wide range of rhythms and styles, from ballads to hymns, to industrial noise and to “dark” approaches, all of which result in a album with very varied and surprising textures, recorded in studios around the world – from Mexico to Japan or Israel. His second solo album, “Grace For Drowning” (2011), was nominated for the “Best Surround Sound Album” category at the 54th Gammy Awards and entered the best places in the German charts , Dutch, British or Polish.

Among his musical projects, he has also collaborated with the well-known Swedish musician Åkerfeldt from “Opeth,” a collaboration that resulted in the album “Storm Corrosion,” with strong influences of atmospheric rock and dark orchestral arrangements inspired by Stott Walker’s Talk Talk – some of the artists admired by the two.
(“Talk Talk”, 1981-1992, is a British band of synthpop / new wave, popular in the 1980s. The band became known especially for the hits “Talk Talk”, “Today”, “Such a Shame” My Foolish Friend, “” Life’s What You Make It “, etc.).

In addition to his compositions, Steven Wilson has also become a musical producer, being highly regarded for the high standards of his work. Among the artists he has collaborated with are: Opeth (for which he produced and / or mixed 4 albums), Anathema, Norwegian artist Anja Garbarek, or Israeli star Aviv Geffen.

In 2012, Steven Wilson won the title of “Guiding Light” at the “Progressive Music Awards” in recognition of his important contribution to the development of the international music scene.

Leprous, come back to an ARTmania event after seven years of absence. The band is the new sensation of progressive metal, one of those “rising stars” of the Norwegian musical scene. He is a visionary band that is not afraid to experience or surprise and defies any attempt to conform to patterns. In a world where the “progressive” genre offers the public so many choices, it takes a lot of courage and a lot of personality to manage to turn people’s eyes on you. And Leprous is one of these bands.

Their music is a compilation of styles such as progressive rock, jazz or pure metal, with the influences of classical music composers or artists of various genres such as Björk, Muse, Porcupine Tree, Massive Attack, Ulver, Opeth or Radiohead. Tall Poppy Syndrome (2009), “Bilateral” (2011) or “Coal” (2013) albums drew the attention of the press and appreciation of the audience, while “The Congregation” (2015) at Leprous the chance to participate in a world tour. Their last album, “Malina” (2017), was greeted with criticism of enthusiasm, being appreciated as a complex mixture of poliritmic sounds combined with incisive lyrics with a melancholic atmosphere and melodious vocal passages. The album is a change of musical and visual direction, being totally different from what the band used to have their fans. This is one of the reasons why his recording lasted four times more than any other album so far.

Throughout their career, Leprous sang alongside some of the most well-known names of the international musical scene, such as Amorphis, Therion or Opeth.

ROME will climb for the first time on ARTmania Festival , being considered one of the most important bands of the genre of neofolk and martial industrial. Set up in 2005 by the Luxembourg-based Jerome Reuter, this musical project became known as the “architect of melancholy”, a central theme of ROME compositions.

The name of the band is a derivative of the founder’s name, and the influence of the pieces comes from the works of some authors such as Jacques Brel, Leo Ferre, Albert Camus or Jean Genet.

ROME creates cinematic musical landscapes with a distinct identity, combining the passion for history and the depth of poetry with an acoustic inspirational music that includes various tones – from the French chanson, to darkwave, to the bitter and angry notes of post-punk English, dark ambient, apocalyptic folk, acoustic rock or cold wave. All of this in complex and unusual musical arrangements that transforms ROME’s work into a surprising and memorable musical experience. Early next year, the band will release a new album whose songs will be heard by the band’s fans at the ARTmania festival.

Zeal & Ardor, for the first time in Romania , is a “avant-garde metal” project founded in 2014 by Swiss musician Manuel Gagneux (also known as “Birdmask”, a “pop pop” project in which he was involved). Zeal & Ardor already has an album, “Devil is Fine,” and his music is the meeting place of a wide range of musical genres: a mix of “avant-garde metal” with spiritual influences and tribal rhythms deepened by the depths black metal and surprising changes imprinted by experimental rock approaches.

Distorted Harmony, for the first time in Romania , is one of Israel’s most popular “progressive metal” bands, which has been remarked by its modern approach to classic progressive metal. Founded in 2010 in Tel Aviv, by Yoav Efron (producer and keyboards) and Yogev Gabay (drums), the band already has two studio albums, Utopia (2012) and Chain Reaction (2014) the third material and went on stage at some of the most popular European or American festivals such as “ProgPower Europe” (2016), “Haunted Sky Festival” or “ProgPower USA” (2017).

The subscriptions for the ARTmania 2018 Festival were put on sale in the Kompostor , Eventim , MyTicket and iBilet networks , the first subscriptions having a special price of 150 lei / piece, valid until the end of December 2017. Since January 2018 the price of a subscription will be of 190 lei / pcs.

ARTmania Festival is a platform dedicated to promoting all forms of artistic expression inspired by rock culture, which has become the main regional promoter of contemporary music projects. ARTmania is not just concerts by large international and local bands. Music is a basic component from which everything started, but it is only part of the experience the festival wanted to offer to art lovers in Romania and abroad.

Since its inception, ARTmania has been designed as a cultural platform designed to provide the public with as many events and ways to experience varied forms of artistic expression, such as concerts, exhibitions, book launches or film screenings. This common meeting space of artists and audiences at the level of sound, colors, images or letters, hosted by the Square and the medieval fortress, creates the space of fairy tales and magic that is essentially the spirit of the festival.

Being the longest-lasting rock festival in Romania and one of the longest-standing traditions of the regional cultural scene, ARTmania has shaped its own identity through a bold concept and a special ambience: the Great Square of one of the most beautiful fortresses medieval times in Eastern Europe.

ARTmania is always exploring new roads, wishing to give the audience a richer experience with each new edition. Over the twelve years, a series of important bands from Nightwish, Serj Tankian and Devin Townsend, Die Toten Hosen, Within Temptation, HIM, Tarja Turunen, The Gathering, The Sisters of Mercy, Lacuna Coil, Helloween, Poets of the Fall, Deine Lakaien and many others. 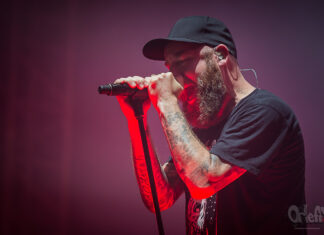